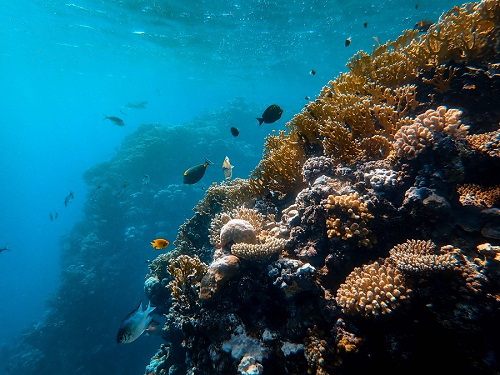 Researchers at the University of Colorado in Boulder have developed a net carbon neutral (or even carbon negative) method of producing Portland cement by substituting quarried limestone with limestone produced by microalgae.

The Problem With Traditional Portland Cement

The problem with traditional Portland cement is that it is made by quarrying limestone in large quarries and burning it at high temperatures, thereby producing 2 gigatons of carbon dioxide every year! To make matters even worse Portland cement, the most popular kind of cement, also uses ground (quarried) limestone. The entire process not only produces massive amounts of damaging greenhouse gasses, but there is also the environmental impact of quarrying.

Idea Came From Snorkelling In A Coral Reef

After visiting a coral reef on holiday in Thailand, the lead principal investigator of the University of Colorado researchers, Wil Srubar, noted how coral’s structure is grown from calcium carbonate, which is also the main component of limestone. This gave Scrubar the idea that limestone could be grown rather than quarried.

‘Biogenic Limestone’ – The Green And Sustainable The Replacement For Quarried Limestone

The biogenic calcium produced in the lab by the University of Colorado researchers comes from coccolithophores, which are cloudy white microalgae. They are able to produce the largest amounts of new calcium carbonate on the planet at a much faster rate than coral. They do this by capturing and storing CO2 from the atmosphere in the form of calcium carbonate shells that form on their surface.

Can Be Cultivated Almost Anywhere

Coccolithophores can live in cold, salt, and fresh waters which means they could be cultivated anywhere in the world, on land, or at sea.

The researchers have calculated that cultivating the microalgae in 1 to 2 million acres of open ponds could supply all of the cement limestone needs for the whole of the United States. Although this sounds like a lot of space, it would only take up 0.5% of all land area in the U.S.

The microalgae also produce other commercially valuable by-products such as lipids, proteins, sugars, and carbohydrates. These could be used in the manufacture of e.g., biofuels, food, and cosmetics, and could help offset the cost of biogenic limestone production.

A viable and sustainable way to not only remove 2 gigatons of carbon dioxide from the atmosphere every year from what would have been burning limestone, as well as mass produced microalgae absorbing even more is an attractive prospect. It could also be a way to improve air quality, reduce the environmental damage caused by quarrying, and, if the price of biogenic limestone is right, increase equitable access to building materials around the world. There is some confidence among the researchers also that the biogenic limestone could be quickly and easily swapped with the quarried limestone without affecting the quality of the product. The fact that the microalgae also produce other useful by-products could be a factor in offsetting the cost of the process as well as reducing the carbon footprint on the other products that they go into.